Pelican progress is at a standstill

Being not exact might just be a good thing.

I'll elaborate on that...
I've been at a standstill working on the Pelicans. That darn background (again). If you've been following the progress you'll remember that I ditched my original plan of appliqué on the water background as it was distracting and would overpower the pelicans. I ordered more silk in a slightly different shade and did some freehand water and waves. It was okay, better than the appliqué but still not perfect. Anyway, I dropped the background and went to work on the pelicans themselves -- which turned out awesome. Time came for me to get back to work on the background. As I still wasn't thrilled with the background I decided to try a different approach. I created a stencil of the actual waves from my master copy and painted according to the stencil. This was an exact replica of the photo. Well guess what... I didn't like it. I felt it was entirely too much, it pulled your eye to the background instead of to the pelicans. That was totally not my intention, why would I spend so much time and effort to create these beautiful pelicans only to have them fall second to the background?!!

Here is the original photo: 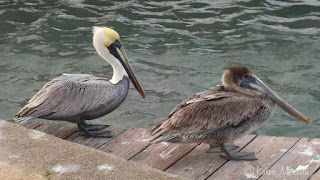 Here is the freehand background: 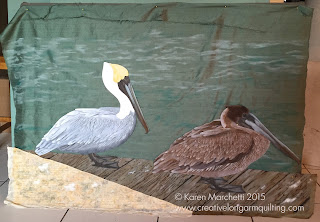 Here is the stenciled background: 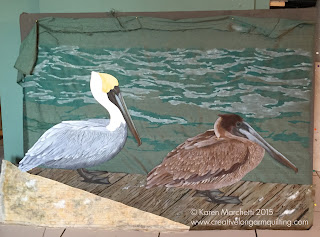 I asked my two best friends opinions and they liked the stenciled background. When I questioned if it distracted from the pelicans they replied that it didn't, without the movement of the water the piece became flat. I asked another good friend and she choose the freehand background saying the stenciled background was too much and did cause distraction. Ahhh!  So, I put the two pictures out on Facebook and asked for opinions.  It was a landslide -- the freehand background, and for all the reasons I thought initially. While the stenciled background showed waves and water movement it was entirely too distracting. Your eye went immediately to the water background as opposed to seeing the beautiful pelicans. A few people mentioned the stenciled background looked as if it was rough seas. Well, me being the photographer, it was. It was a crappy day, which explains the rough-looking waves and why the pelicans were hanging at the boat ramp just waiting for fisherman to clean their catch and drop some scraps. Another person mentioned that something has obviously caught the attention of the one pelican which is why he stood up and that perhaps I should place something in the water. Well, it was me who caught his attention when I walked up to photograph them.

The majority of Facebook land agreed with me and thought the freehand background worked better for this project.  I do appreciate every opinion and comment!  They helped me to get over my must-be-exactly-like-the-photo mentality.  Because all this being said I am kind of a nut when I create these pieces -- my brain tells me it must be exact. And no, I don't like the exact in this piece. So I guess it is okay to take some creative license and soften the background, staying with the freehand painting. I want the pelicans to be the focus, not the water - that must remain a background as opposed to a focal point. The eye needs a place to rest. And, I also have to remember that thread will be added to this when it gets quilted -- thread which will also create additional shading, highlighting, and movement.

So back I go to finish the freehand background (no, neither background is completed in the photos). Wish me luck -- I want this piece to be perfection!
Posted by Karen Marchetti at 10:22 AM 5 comments:

So I spent all day yesterday - and I mean ALL DAY. The dogs woke me up promptly at 5:00 am - apparently no one told them about the time change. Up that early meant only one thing, lots of work would be happening on the pelicans.

I started with making my applique pieces: 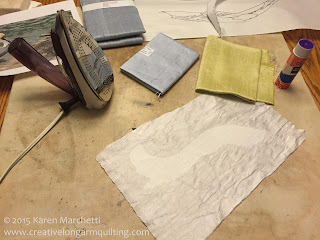 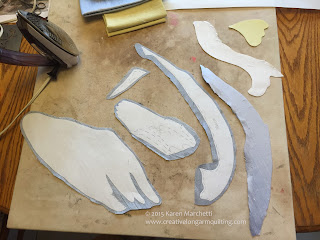 Remember the last pelican post - the one where I forgot to take before pictures almost every time. Well this time I was smart. I placed all my pieces together and took the before pic. 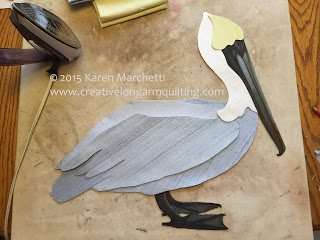 The feathers along the backside: 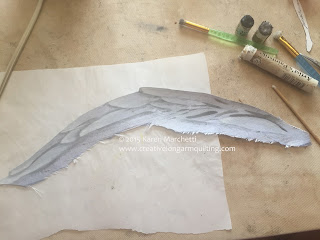 Then the tail feathers: 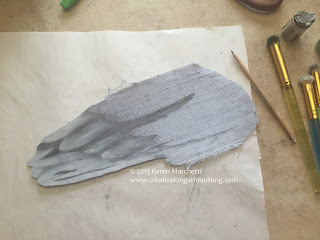 Next was the underbelly: 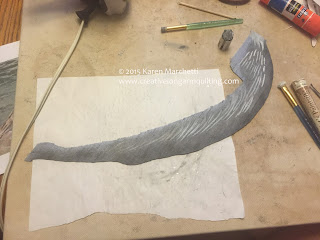 And then the large wing feather (yep, forgot a single pic of that one).
But here is the finished pelican: 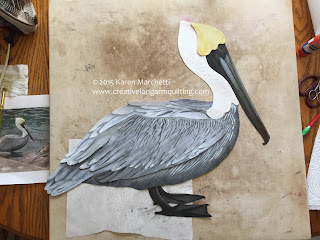 Now all that's left to work on is the background. I know I hard started it, but it needs more work. Then I need to invisible applique all the pieces of both pelicans together, and then the placement on the background. It's all coming together nicely!
Posted by Karen Marchetti at 9:20 PM 2 comments: 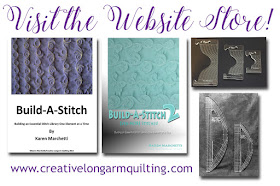 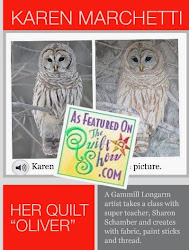